As we all know, Royal Leamington Spa Angling Association’s fish stocks thrive in our well cared for waters. Almost every coarse species is represented and available to members at the club’s lake and river venues, from barbel, bream, chub, dace and roach, to tench, carp, pike, perch and zander — and all run to specimen sizes.

I say almost, because there’s one missing, surely…

No, we have them too…

I always thought Leamington’s waters must hold them because they’re indigenous to the country’s lowland river systems, but because they’re fairly rare fish compared to say, roach or bream, they’re not caught so often. However, they’re not nearly as scarce as people may think —the problem is that they’re hardly ever recognised let alone reported whenever or wherever they are caught!

Then, a couple of years ago now, Keith Jobling sent over pictures of a number of fish from the Lido at Stratford-upon-Avon that he suspected were silver bream. I made scale counts and eye measurements declaring them all as the real McCoy and without hesitation. They were ‘right,’ and were the first silver bream I’d ever seen from the Warwickshire Avon.

But they were never seen again…

Then one day whilst fishing for roach at Leamington’s Recreation Ground stretch of the Avon at Lucy’s Mill, I finally brought in one of my own. A cracking pristine ‘silver’ getting on for a pound in weight.

Mistaken by almost everyone who ever catches them, routinely dismissed as ‘hybrids’ or mere ‘skimmer’ bream, they’re anything but. As separate from bronze bream as roach are from rudd, the similarities are superficial because they’re a species in their own right and though easily confused with many other fish, especially when small, when they grow they’re quite distinct and actually fairly easy to identify.

The picture above of my first ever Wark’s Avon silver illustrates their defining characteristics — those certain features that no other coarse fish shares when all things are taken into consideration and tally. 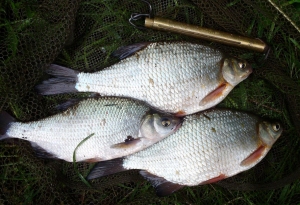 Checking these things in the field, though, is difficult. Performing them accurately would be to mistreat the fish it would take so long but luckily there’s a few visual clues and a handy rule of thumb that’ll help.

Firstly the fish must be a bright chromium-silver colour, have few large scales and those reddish-pink fins too. Yellowish and dull looking is no good, many small scales and grey or orange tinted fins aren’t either. Then the eye is measured against the tip of the little finger. It must be at the top of the skull, close to the snout, and fit the head four to four-and-a-quarter times over from tip of snout to the back edge of the gill plate. Four-and-a-half to five times and it’s certainly a bream or a hybrid of one.

Lastly, they can carry a little slime, but if your line is covered in gobs of the stuff you do not have a silver bream but do have a skimmer…

But I don’t think there’s ever going to be any confusion on that score.

Of course silver bream themselves can themselves hybridise with both bream and roach and the offspring the most confusing of all. Nevertheless, they are still distinct from each other. So to illustrate what a true silver bream must have and what it must not, and what a hybrid has far too many of to be a true one, here’s a picture of both taken on another day’s ‘roach fishing’ at Lucy’s Mill.

Tell these two apart you’ll never confuse a silver bream with a skimmer ever again!